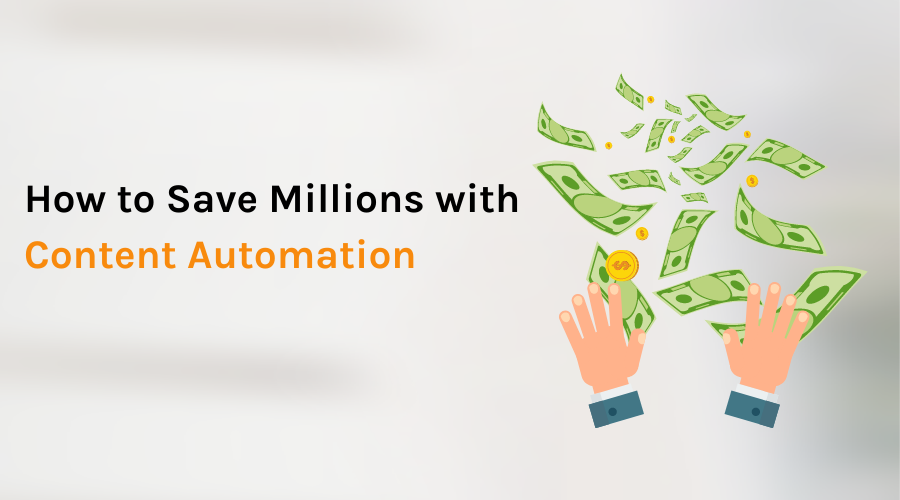 What are the advantages of automated texts? And how much money can be saved using automated copywriting? Find the answers in this post.

Automated content creation is on everyone’s lips. Experience shows: By now, the vast majority of large online stores use a product description generator in some form. In particular, e-commerce providers that carry more than 20,000-30,000 items in their online store have already recognized the technology for themselves and use it in content creation.

Nevertheless, most customers do not allow themselves to be looked at in the cards:

Users confirm that they have achieved success with the automatically generated content. But they keep the concrete figures with which this success can be measured to themselves. After all, it is comprehensible: Through the automatically generated texts, they gain real competitive advantages, be it better visibility through high-quality texts or better conversion rates through proven call-to-actions. The traffic data and actual sales are not communicated in the process.

Effects of Automated Content Creation: the Method of Measurement

One question remains: How much money do automatically generated texts bring to companies? To answer this question, the following already implemented projects were analyzed:

Here, it was taken into account how long it takes for a longer text to rank organically and lead to more traffic on the page. It should be noted that it is unclear exactly when the customer put the texts online. For this reason, an assumption was made about how quickly the customer can integrate the texts into their store – especially for large online retailers, this can take some time, as the large amounts of text are not entered manually.

In the second step, the SEO tool Ahrefs was used to determine the effect of automated content. The first step was to check how the domain, i.e. the entire online store, was doing today. For this purpose, three key figures were checked: “organic keywords” (1), “organic traffic” (2), and “traffic value” (3).

“Organic traffic” is nothing more than the mathematical derivation of what position a single page of the store has on Google and how many people statistically come to the store.
“Traffic Value” means a contribution that the website operator would have to spend on Google Ads to achieve the same traffic effect.

These figures are calculated values (not live values), which tend to be too low. From the comparison of real websites with the figures from Ahrefs, it is clear that there are significant differences between the real figures and the calculated values.

In the third step, two points in time were determined:

Even though this research is not empirical and does not represent a scientific study, the results are quite interesting.

It is also important to remember that the numbers analyzed in Ahrefs are significantly lower than the real values. Moreover, it can be assumed that this effect has a roughly similar impact on all websites.

This means: For all customers analyzed with the help of Ahrefs, it can be assumed that the real access figures are significantly higher. With regard to the “Traffic Value”, it should also be noted that this can only give an approximate estimate of what the monetary effect of automatic text generation might be. The effects on the website can of course also be attributed to other measures (other SEO measures, link building, regular content). Nevertheless, the automated texts are delivered in large quantities (>10,000), so they have a very high share in the changes on the website.

Example: Results of an E-Commerce Store from the "Pharma" Sector

In this anonymized example, we are dealing with a large online store that operates in the “pharmaceuticals” sector and has been on the market for a long time.

These values vary for different clients. Among the clients analyzed, there were e-commerce vendors who saved up to $3 million this way. These and other examples can be downloaded from this website.

Conclusions and an Unexpected Surprise

Many of the stores have acquired 25 % to 95 % more visitors per month after half a year thanks to automatically generated texts and have received approx. 20-90 % increase in traffic value – also monthly. With absolute values of up to $250,000 per month, the positive effects are thus in the millions per year.

And yet: even with this great effect, there is a mistake that many companies make, but which can be avoided. Large content projects such as automated content creation are based on several steps. Before pressing the “publish the texts” button, companies first organize their data, organize the process, have the texts created, check them and give their feedback – they put quite a bit of work into the project.

The result: after the project, they first take a content break, and this has noticeable negative consequences – visibility drops. If no mass changes are made to the text, then this has a strong effect – which was also analyzed using Ahrefs – and the values drop significantly once again. To counteract this effect, it is crucial for the break in content creation to not last longer than 6 months.

Recommendation: After your first automated content project, you should start the next content project after 6-9 months at the latest. Otherwise, your store will lose visibility. For example, you can add text to additional articles or create descriptions for additional product categories. In addition, existing content can be extended or updated or call-to-action formulations can be adapted.

As a partner of AX Semantics, Awantego has been creating automated texts for clients – mainly large e-commerce companies – using AX Semantics’ software since 2014. 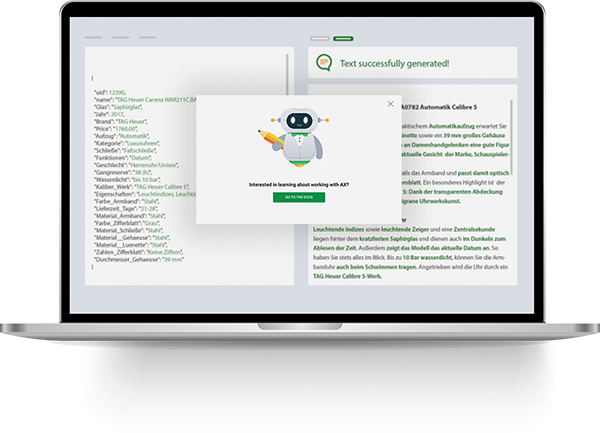